Or, why Amazon has too many leadership principles

Last week Amazon announced two new leadership principles (LPs), bringing the total number of LPs to sixteen. This got me thinking about the idea of prioritizing, and how much the lack of it irked me when I worked at Amazon.

Prioritizing: So easy a high-schooler could do it

One of my better choices in high school was to stick with the debating team every year. I gave up my Friday nights to debate politics with other pimply teenagers from across town. One memory of this time has stuck with me more than any other. We were going through practice exercises with our coach, and in particular, how to structure our case. I can't remember what the topic was, it could have been climate change, or drugs in sport. Just imagine it was something where we could have almost the same debate now, nearly twenty years later. We students had come up with a list of five or so bullet points about why drug cheats should be banned for life, or why there should be stiffer penalties for carbon pollution, or whatever the topic was, and our coach said:

No, you always have three points. No more, no less.

This seemed like a pretty arbitrary rule at the time, and it is. But there is a method to the madness. In debating you are judged in part on how you structure your case. So having a laundry list of ten points about why we should do xyz doesn't create any structure, and a simple slogan like "drugs are bad" isn't substantial enough for most audiences. But why three? Why not four, or two? 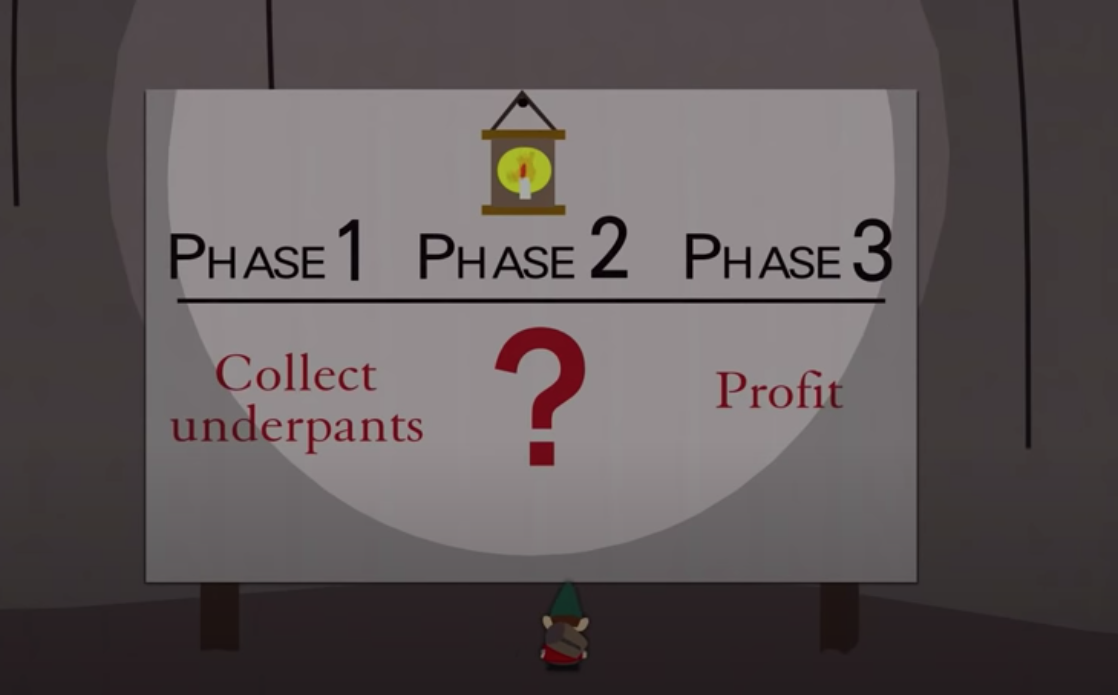 Even this screenshot of a South Park joke shows that fitting your thoughts into a confined structure helps make your communication clearer. I can't count the number of times that by trying to fit five points into three, we merged two, to create one, stronger point with more evidence behind it.

An even better way to turn a laundry list into a few strong points is to sort the list in order of importance, and start at the top. That way, if we ended up spending too long on one point, then at least we spent our time on something important! We gave the most important point to the first speaker, and each speaker delivered the most important points at the beginning of their speech. In other words, although we were teenagers, we were able to prioritize.

I ended up applying this rule of three wherever I could in other classes, like writing essays for english. I got lots of comments from teachers about my good structure! In the nearly 20 years since that debating team practice I've spent a lot of time in professional contexts telling people to delete content, remove words from slide decks and generally prioritize what they're trying to communicate.

I only made this letter longer because I had not the leisure to make it shorter. - Blaise Pascal

Prioritizing, or removing information from communication can often be difficult, especially if you work with engineers. In engineering, the details often do matter! As an example, removing a single character from a computer program can sometimes break it completely. But if you're trying to communicate, especially to groups of people, or if you're playing the role of a mentor or teacher, then complexity is your enemy.

When I started at Amazon in 2014, I was pretty enamoured with the culture. I really liked the systematic nature of the LPs, and how Amazon has been able to scale its culture to tens of thousands of engineers, and now millions of employees worldwide. We would use the LPs when making hiring decisions, when discussing roadmaps, and when evaluating employee performance. 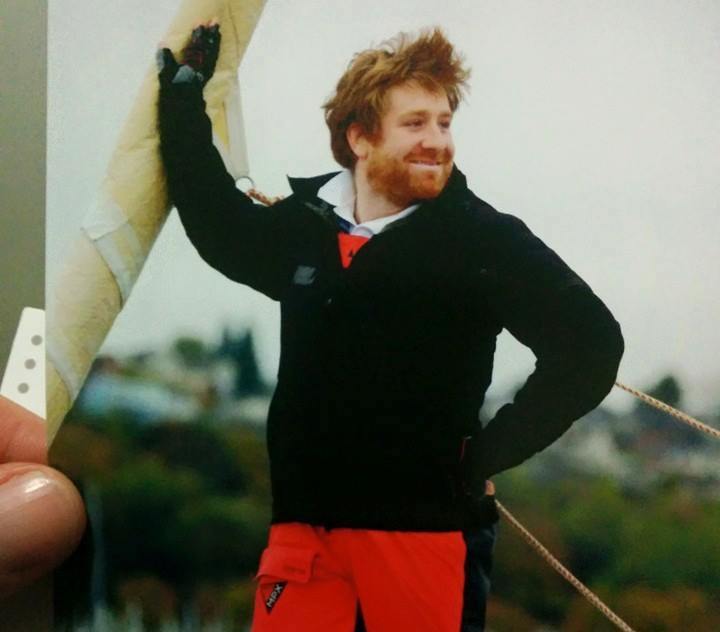 Me, a proud and happy Amazon employee in early 2014.

The only thing that I always disliked about the LPs was that until 2021, there were fourteen of them!

If I brought this laundry list of points to my high school debating coach, she would have told me to try again!

At one point while at Amazon, I had an internal wiki page where I tried to structure the LPs, so I could remember them better. I think it was something like:

Hopefully these categories make some kind of sense1. Frugality, for example, is part of Customer Obsession because it wouldn't be very Amazonian to spend money on expensive, or frivolous, decorations at your HQ. That money could be better spent reducing prices for customers! Likewise, a Bias for Action is one way to Deliver Results, and hopefully people will trust you if you have a history of Being Right, A Lot.

In August 2015 the New York Times published an article by Jodi Kantor that really rattled Amazon. Several managers told me that the article seriously impacted Amazon's ability to hire. The quote that got the most attention was "Nearly every person I worked with, I saw cry at their desk.". Personally, I never saw anybody cry at their desk. But the article did a fairly good job of highlighting some of the issues with Amazon's workplace culture, for example:

But many others said the culture stoked their willingness to erode work-life boundaries, castigate themselves for shortcomings (being “vocally self-critical” is included in the description of the leadership principles) and try to impress a company that can often feel like an insatiable taskmaster.

When I interviewed at Amazon, in 2013, Vocally Self Critical was a whole leadership principle. Now it's part of Earn Trust and Amazon seems to have done a pretty good job scrubbing the web of the old version. Luckily, I found a PDF in my email from 2013 with the mysterious Vocally Self Critical LP.

Vocally Self Critical Leaders do not believe their or their team’s body odor smells of perfume. Leaders come forward with problems or information, even when doing so is awkward or embarrassing. Leaders benchmark themselves and their teams against the best.

I actually remember the all-hands meeting when the announcement of Vocally Self Critical changing to Learn and Be Curious was announced. One of the most accomplished technical leaders at the company, Laura Grit was introduced as a leader of the Amazon Women in Engineering (AWE) group. She made reference to unconscious bias, and Vocally Self Critical showing up more for women than men.

Overall, it seemed like a positive, well thought through change to me. However my spidey senses, and a few years of perspective, tell me that the real motivation was damage control rather than lofty diversity goals. I observed plenty of changes made inside Amazon after the NYT article. Everything from better equipment for developers to the Pivot program.

Whether Amazon is reacting to criticism, or boldly going where no capitalists have gone before is hard to know. I no longer have a view from the inside, but Amazon seems to be doing things a bit more publicly these days...

Now, in 2021, just as Andy Jassy's became Amazon's second CEO, the company added two more leadership principles. Unlike the Vocally Self Critical change, this wasn't done in the dark of night. There was plenty of press coverage.

The two new leadership principles are:

Putting on my 3rd speaker (i.e. rebuttal) hat from high-school debating, these new LPs are what I call a target rich environment for criticism.

First, They are meaningless

I was going to say that the new LPs are weasel words, but they're actually worse than that. An LP like Earn Trust contains both instructions, and a goal in only two words. To Earn Trust means to do things, like be honest, be empathetic, be competent, and so-on. If you do those things, people will eventually trust you. On the other hand, "Success and Scale Brings Broad Responsibility" is somehow a truism, and meaningless at the same time. It's a truism because of course success and scale brings broad responsibility. That's the kind of thing that critics have been saying to tech leaders for decades. You almost want to say, "Wait, did you build a trillion dollar company and only now realize that you have responsibility for things?". But it's also meaningless because it doesn't provide any guidance on how employees should act. Like, should rank-and-file Amazonians start sending question mark emails to Amazon leadership when they act questionably? Apparently not. I once counseled an Amazon colleague that "Amazon is not a democracy". The org chart is a pyramid, with Mr Bezos, and now Mr Jassy at the top. So telling current and prospective employees to think of the responsibility that comes with success and scale is what you might call a bit rich.

Second, making them the fifteenth and sixteenth LPs shows that Jassy and his S-team really don't care

If I told you I had sixteen goals for the week, or year, would you think that numbers fifteen and sixteen were high priority? I, like many before me have once or twice tried to bite off more than I can chew. I hope you would see through my delusion. Very few humans are capable of holding sixteen thoughts in their head simultansously, let alone "demonstrating [sixteen things] through our actions every day", as Amazon says that their leaders do2. Contrary to the goal of this change, adding the fifteenth and sixteenth leadership principles shows that the leaders at the top of Amazon really, truly, and utterly do not care about being a good employer or their responsibilities. They don't care enough to replace or change any of the existing LPs, and they don't care enough to make the new LPs memorable or actionable.

Third, they don't say anything new

Being a good employer was already embodied in the Hire and Develop the Best LP. Are the best going to accept low wages, or poor working conditions? Likewise, the idea of responsibility is baked into the Ownership, and surely Think Big implies thinking about scale?

I'm sure that Mr Jassy is aware of the herculean job he has ahead of him. Following in the footsteps of a founder-CEO didn't go so well for Steve Ballmer at Microsoft, or John Sculley at Apple. Maybe Mr Jassy will fare better. But if he can't do basic things like prioritize as well as a high-schooler, then my hopes aren not high.

For a long time, I felt almost guilty about the way that I wanted to pare-down long lists of goals, action items, errors, and so-on while at Amazon. But over time I've become more convinced that prioritizing is not only not-lazy, it's a sign of discipline. It's also necessary ingredient for success. It turns out that even Mr Bezos agrees:

Eight hours of sleep makes a big difference for me, and I try hard to make that a priority. - Jeff Bezos (medium.com)

Maybe if I was a billionaire, I too would prioritize eight hours of sleep for myself, while constantly adding new leadership principles for my employees to uphold. But we will likely never know. In the meantime I plan to prioritize the people and things that are important to me. You too can feel satisfied with whatever you chose to prioritize today, this week, or this year, rather than feeling guilty about the literally infinite possibilities of things that you didn't do. If billionaires get to prioritize eight hours of sleep, then so can we!

I'll leave you with a couple of quotes.

"Everything is negotiable. Whether or not the negotiation is easy is another thing." - Carrie Fisher

1: I've left one of the LPs out, partly because I don't like it very much, and partly to see if anybody notices!

2: "We hold ourselves and each other accountable for demonstrating the Leadership Principles through our actions every day." - aboutamazon.com retrieved on 2021-07-12.